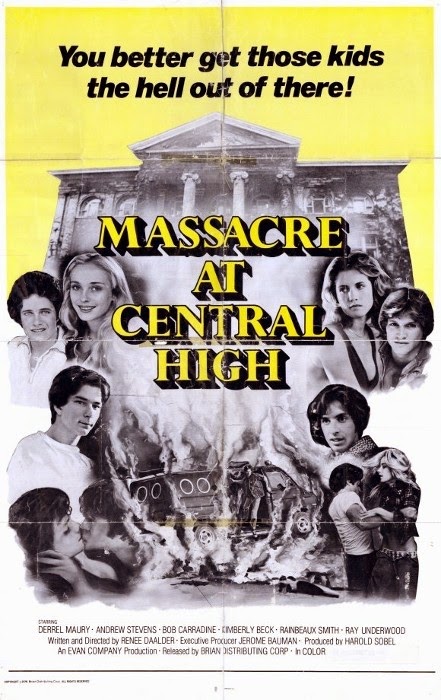 About a million years ago, I caught Renee Daalder's Massacre at Central High (1976) in the wee hours of the morning on one of the SuperStations -- you know, when the SuperStations didn't suck. And now I've seen this civics lesson, thinly disguised as a horror movie, uncensored, complete, and commercial free. I wrote it up years ago, too, and now, despite seeing Cheryl "Rainbeux" Smith and Lani O'Grady completely starkers (-- and Kimberly Beck, Robert Carradine and Derrel Maury if we're really keeping score), my opinion on the film hasn't changed all that much. About as subtle as an After School Special by way of George Orwell, William Golding, and George Romero, the message gets mixed-up and lost somewhere in a succession of bloody -- make that, fairly bloodless, coups. 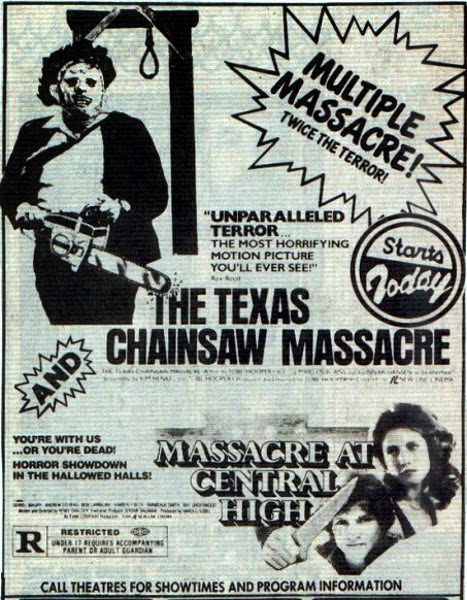 Massacre at Central High was the first film brave enough to use the M-word in it's title after Tobe Hooper's classic Texas-style massacre had sent the country into a tizzy two years before. And as originally conceived by producers Harold Sobel and Bill Lange, they were looking to make another bloodbath in that same severed vein. Things changed when Daalder was hired to write and direct a picture to fit that title. He had been recommended to Lange by his friend, Russ Meyer (Beyond the Valley of the Dolls and Faster, Pussycat! Kill! Kill!, both of which we'll be getting around to reviewing for this retrospective), for whom Daalder had worked as a cameraman. And while Lange liked the film Daalder eventually made it had become less of an exploitation piece and more of a political allegory. The producer also knew it lacked the horrific punch he had asked for and sensed they were gonna take a bath on its subsequent release. And they did. 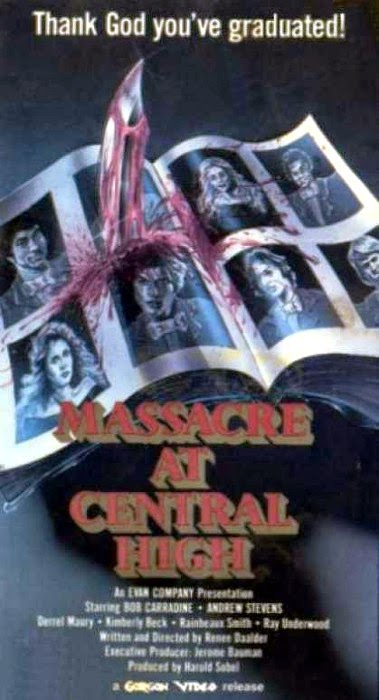 I believe it was George Orwell who said all revolutions are doomed to failure. For no matter how good the intention, once the seat of power is overthrown the revolutionaries, in most cases, become worse than those who came before them. In the film, this is represented by a group of slackers, slobs and nerds, who are pushed around by the jocks and preppies, until they find a catalyst in a transfer student to overthrow this Gestapo-like clique. This catalyst, David (Maury), starts the revolution after he is permanently injured by the jocks when he refuses to join them, triggering our massacre. It should be noted that these actions take place because these others refused his overtures to stand up for themselves and fight back. But once all the jocks are eliminated -- except for David's old friend, Mark (Stevens), whose days are numbered -- after a brief transition period, the school reaches a serene equilibrium; but this doesn't last as the power vacuum left by those killed is filled by their former victims and the violence begins anew. 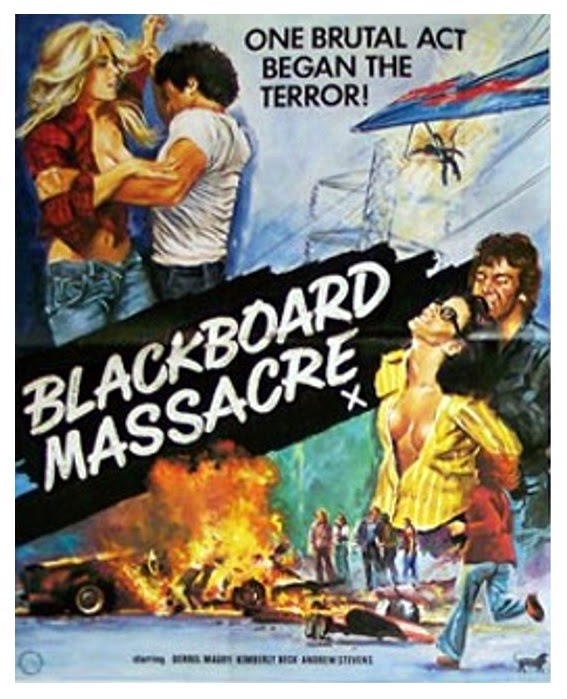 Okay, a friendly piece of advice to all future filmmakers out there: If you have the word "massacre" in your title but it's nearly an hour into your film before anyone is, well, massacred, you're p'rolly gonna piss off your target audience. Now, my biggest problem with Massacre at Central High is not with the blunt political overtones but with the jumbled mess Daalder asks us to make out of them. However, I do feel sorry for any slasher fans who rented or bought this based on the title and some notoriously misleading VHS box art. The body count is fairly high; it just isn't very graphic. Anyhoo... 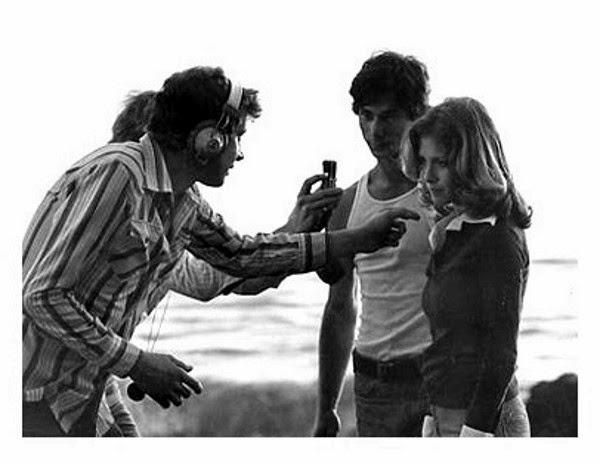 Every class and social strata are present and accounted for in the microcosm of Central High but, according to Daalder, and his mighty morphin' metaphors, none are worth a damn when it comes to power and leadership as the oppressed become the oppressors. At first it's railing against the Junior Gestapo, and then later its suggesting that things might have been better while they were in charge. Status quo is good? Change is good? Which is it? Make up your damned mind already, movie. Most contend the whole crux of the plot is to somehow get the neutral Mark and his girl, Teresa (Beck), to grow a spine and join the fight. Only when they finally take a stand against David, at the end, does the chaos truly end. But! With everything we've seen so far, whose to say -- or how can we believe -- that a school run by Mark and Teresa is going to be any better? Fie and *pfui* on that, I say. 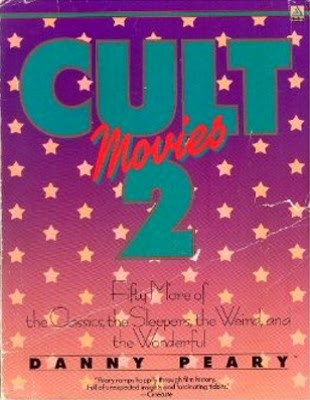 The Fine Print: Massacre at Central High was watched via a digital purchase through Amazon Prime. Watched as a double-feature with Jonathan Kaplan's Over the Edge (1979). What's the Cult Movie Project? That's three down, with 197 to go.

Detailed review of Massacre at Central High at 3B Theater.

Newspaper ads for Massacre at Central High at the Morgue. 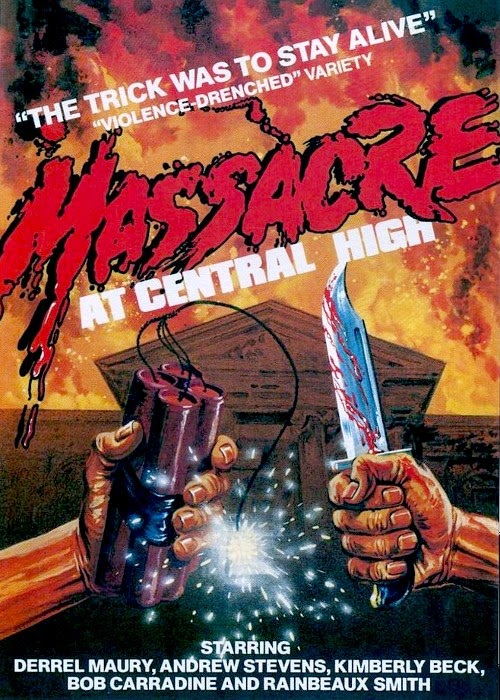